Things are getting tricky out there!!  As a I write this deadly tornadoes are battering Texas and a wide swath through central and southern USA. December tornadoes are rare for this area and can be largely attributed to the very strong El Niño in the Pacific. 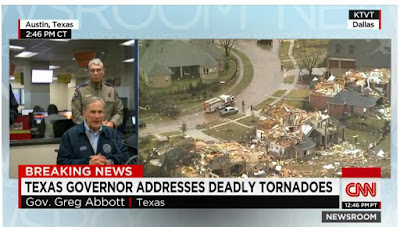 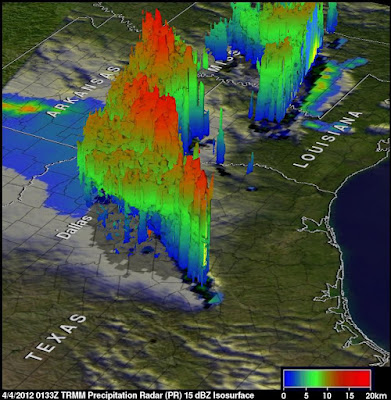 We rely on science to make decisions - but how does science really work...??

This video provides an excellent explanation.


"Mapping the Blue" is an excellent film.  It provides an overview of the benefits -- and challenges -- of protecting large sections of our oceans. I highly recommend watching this short film for the beautiful scenes from the Cook Islands as well as insights into how Marine Protected Areas can shift the conversation towards healthier ocean ecosystems.


By protecting ocean ecosystems rather than focusing on individual species, Marine Protected Areas (MPAs) are powerful tools for conserving and restoring ocean biodiversity. These special ocean areas also provide benefits to cultural and geological resources and can help sustain local economies. In addition, MPAs contribute to healthier, more resilient ocean ecosystems that can better withstand a wide range of impacts.  No-take marine reserves have been proposed as one of the most successful tools for conservation and restoration of coastal and marine ecosystems.


In 2012 the Cook Islands announced the largest Marine Park on Earth at the time. Since then, in 2015 the USA enlarged the Pacific Remote Islands Marine National Monument to form the largest MPA on earth at 490,000 sq. miles or 3x size of California.

The magnificent Cook Islands are among the most awesome places on the planet and local people, traditional leaders and the fishermen are determined that it should remain so.

"Mapping the Blue" tells the story of how Rugby League star, Kevin Iro, turned conservationist and founded the world's largest sanctuary where he used to play as a boy. By using high tech mapping, Iro and his team are able to show the best uses for areas within this pristine ocean park which is good for conservation and the needs of local people.

This film is a must-see for all those interested in the health of our oceans from marine biologists to recreational scuba divers. It points to a model of how such precious areas can be preserved all over the world and provides hope for the future.
Posted by George Sranko

Photospheres Across the Pacific

Photospheres are a new and exciting way of capturing some of your most scenic locations on a voyage.  I've posted a few of my latest photospheres from the final voyage of the Statendam on Google Maps.  The photo above looks strange until you go to the google maps version and open it as a photosphere.  It feels like you're standing inside a bubble.  This one shows the Statendam docked in Hilo on its final voyage across the Pacific.  We joined the ship in Hilo and I presented a series of lectures across to Singapore.

The easiest way to create a photosphere is with an Android cell phone after downloading the Google camera app.  You can also use a regular camera but it takes more work stitching all the photos together into a panorama and processing the results through another app.  There's an excellent tutorial online at geojournalism.org

Once you've taken a photosphere, you can upload it to Google Maps and it will be available for everyone to see.  One of the neatest things is that you can see how many views your photosphere receives - or any photo uploaded to G Maps for that matter.  One of my photospheres has had over 6,000 views in a matter of three months.

Directions for uploading photospheres are available on the Street view site.  One thing I've noticed with Google -- often unfortunately! -- is that they change things frequently... by the time you read this they may have a whole new approach to all of this... at which point you might have to search for the most recent information.

You can see fantastic photospheres that people have taken all across the planet by visiting the Street view site. 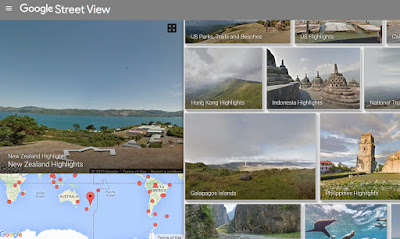 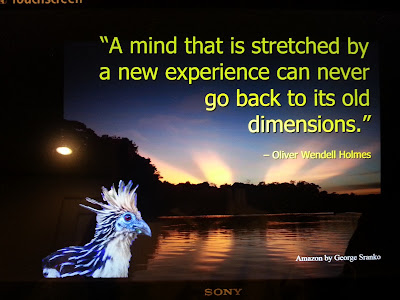 Dear friends from the Statendam -- thank you so much for your kind support and amazing attendance during my lecture series, as we crossed the Pacific from Hawaii to Singapore.  We had a lot of fun, didn't we!

Here are a couple of the quotes that I used during my presentations... please feel free to download copies. 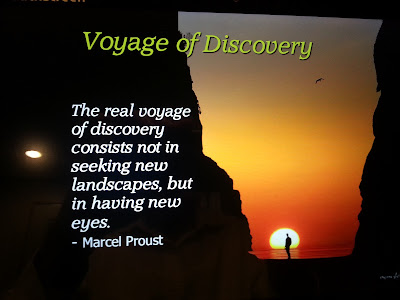 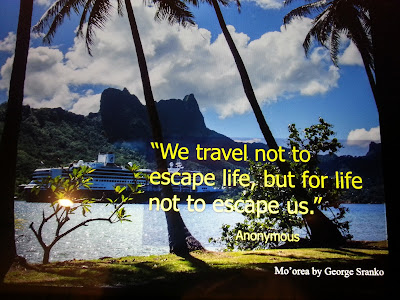 I managed to capture photos of an Oriental Pied Hornbill and Java Sparrow while we were in Kota Kinabalu, Malaysia.
Can you believe we were wandering the wilds of Borneo just a few days ago!  (Ok -- perhaps we weren't exactly in the wilds, but we did manage to hang onto our heads, so that makes for a good story!)

Happy travels wherever you may be in the world.  Please sign up for email updates over on the right.

PS: my next post will be on some of the Photospheres that I captured on our voyage.

Have a look at this amazing creature -- the Sea Sapphire.  Males can make themselves amazingly invisible.

Learn how the Sea Sapphire does this amazing trick in this article in Deep Sea News:
"...a sea sapphire’s color has more in common with an oil sheen than a pigmented jewel. Combine this nifty trick with the sea sapphire’s impressively transparent body, and you have an animal as radiant as a star in one moment, and invisible in the next."

This video shows some birds that simply don't look real!!  Highly recommended!  It also illustrates the paradoxical nature of being male... sometimes you have to be pretty outlandish to land a female.  But what about attracting predators...?  Where's the evolutionary advantage...?  Outlandish males are the 'fittest' and get to pass on their genes.  Moral of the story: males are expendable!!  So what if a few get eaten... there are always plenty more where they came from!

The Birds-of-Paradise Project reveals the astounding beauty of 39 of the most exquisitely specialized animals on earth. After 8 years and 18 expeditions to New Guinea, Australia, and nearby islands, Cornell Lab scientist Ed Scholes and National Geographic photojournalist Tim Laman succeeded in capturing images of all 39 species in the bird-of-paradise family for the first time ever. This trailer gives a sense of their monumental undertaking and the spectacular footage that resulted. Filmed by Tim Laman, Ed Scholes, and Eric Liner.

Plankton - could we live without them...??

Ran across an excellent website by Dr. Richard Kirby www.PlanktonPundit.org. Dr. Kirby is a plankton scientist and science communicator based in the UK.  It's easy to overlook these tiny plants and creatures, but we are beginning to realize that plankton are fundamental to life on earth as we know it.

I can highly recommend Dr. Kirby's website; he does a great job of explaining and illustrating how plankton influence the marine food web from fish to whales, and from penguins to polar bears.  He also shows how plankton are responsible for the oxygen in every second breath we take!!

The Ocean Drifters video is excellent. "Ocean Drifters, a secret world beneath the waves" is a short film about plankton written, produced and directed by Dr Richard Kirby (Marine Institute Research Fellow, Plymouth University) with a narration by Sir David Attenborough and music by Richard Grassby-Lewis.
Drawing upon Richard Kirby's plankton imagery, Ocean Drifters reveals how the plankton have shaped life on Earth and continue to influence our lives in ways that most of us never imagine.
Further information about the plankton can also be found at the Ocean Drifters website (oceandrifters.org) and in the popular book about plankton also titled "Ocean Drifters, a secret world beneath the waves".

We've just returned from a very special voyage on board the ms Volendam, from Kobe Japan to Vancouver Canada.  I want to thank all the very kind and supportive guests who attended my lecture series and made the crossing such a great experience for Jan and I.

I promised a link to a couple of the books I referred to:
"Stung! On Jellyfish Blooms and the Future of the Ocean" by Lisa-ann Gershwin
"The Once and Future World" by J.B. MacKinnon (see a good review here...)

I also referred to the paper by economists Crow White and Christopher Costello, who examined the provocative idea of completely closing international waters to fishing.

My next big idea came from E.O. Wilson who wrote a provocative article in Smithsonian magazine in 2014: "Can the World Really Set Aside Half of the Planet for Wildlife?"


Thanks again!  Please keep in touch...if you have a chance, sign up for my future postings down below to the right - all you need is your email address.

An important study was recently published by economists Crow White and Christopher Costello, who examined the provocative idea of completely closing international waters to fishing.  They found that closing the High Seas to fishing would, on a global scale, simultaneously give rise to large gains in fisheries profit (>100%), fisheries yields (>30%), and fish stock conservation (>150%).


Abstract
The world's oceans are governed as a system of over 150 sovereign exclusive economic zones (EEZs, ~42% of the ocean) and one large high seas (HS) commons (~58% of ocean) with essentially open access. Many high-valued fish species such as tuna, billfish, and shark migrate around these large oceanic regions, which as a consequence of competition across EEZs and a global race-to-fish on the HS, have been over-exploited and now return far less than their economic potential. We address this global challenge by analyzing with a spatial bioeconomic model the effects of completely closing the HS to fishing. This policy both induces cooperation among countries in the exploitation of migratory stocks and provides a refuge sufficiently large to recover and maintain these stocks at levels close to those that would maximize fisheries returns. We find that completely closing the HS to fishing would simultaneously give rise to large gains in fisheries profit (>100%), fisheries yields (>30%), and fish stock conservation (>150%). We also find that changing EEZ size may benefit some fisheries; nonetheless, a complete closure of the HS still returns larger fishery and conservation outcomes than does a HS open to fishing.

In Australia, we're off to the home of the Superb Lyrebird -- one of the most amazing vocalists and mimics on our planet.

Anastasia Dalziell, from the ANU's Research School of Biology, says the skill does not come naturally, but is the result of years of practice.
"The young [lyrebirds] are incredibly vocal but don't mimic at all," she says. It was possible to "get an idea of what they are doing about the age of five", but it was not until they were adults - around age seven - that they had perfected the skill.

One of the most famous clips of David Attenborough is this one covering the Lyrebird:

Here's another short clip to give some idea of the sounds this remarkable bird can reproduce:

For more on the the amazing Lyrebird and the research by Anastasia Dalziell, see the excellent article on ABC:  Lyrebirds prove they're masters of karaoke

Now we're off to the Blue Mountains near Sydney Australia.  In a few days we join the Amsterdam on a segment of the Grand World cruise from Sydney to Singapore, via Melbourne, Adelaide and Perth.