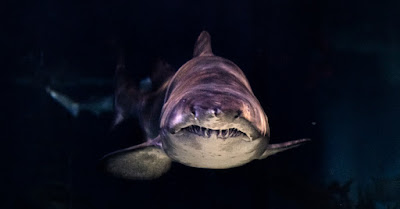 Sharks possess an amazing sense called electroreception.  The ability to sense tiny electrical currents is outside of our range of abilities and may not seem all that useful.  But I think you'll be surprised at how remarkably handy this sense can be if you are a shark searching for food in the vast ocean realms.

The electro-sensory system of a shark is so sensitive that it can detect the tiny electrical currents generated by the muscles of a fish swimming nearby, a great advantage for those trying to find prey in the pitch-black.  This ability would be like a magic sixth sense to us, considering that a shark can detect the electrical signals given off by the beating of a fish’s heart (or human’s heart for that matter).

Consider the implications!  As soon as you jump into the ocean, every shark in the vicinity knows you are there.  There’s no hiding behind a boat or chunk of coral.  If your heart is beating or your muscles are twitching, sharks will sense the electrical current.

Sharks have by far the highest level of electrical sensitivity of any animal on the planet.

Electroreception is based on a system of sensory organs called the ampullae of Lorenzini (see my article to learn more).

Electroreceptor pores on the snout of a Leopard Shark. Photo by Albert Kok on Wikimedia CC-by-03

The electrical sensitivity of a shark is equivalent to being able to detect the electric field of a flashlight battery connected to electrodes placed 10,000 miles (16,000 kilometres) apart in the ocean.  Seems like a stretch, doesn’t it! Believe me, this is based on extensive research.

How many senses do sharks have?  How does electroreception work?  What are the lateral lines used for?

If you want to learn how electroreception works and about all seven of the amazing senses that sharks possess, check out my recent article on biogeoplanet.com.

Of course, ugliness is in the eye of the beholder!
Check out my recent article Why are Deep Sea Creatures so Weird and Ugly? to learn more about the fascinating adaptations that allow these creatures to survive and flourish in the cold, dark depths of the deep sea.
Deep sea creatures have some unique adaptations for living in the icy cold, pitch black depths of the oceans far below the photic zone where light penetrates.  They can have fishing lures that glow in the dark, immense teeth to hold onto prey, and giant stomachs. We may consider these adaptations weird and ugly, but they can be key to survival in the oceans depths of the world.

There’s a certain beauty to adaptations that allow these creatures to survive and thrive in the extreme conditions of the deep sea.

Wishing you a Merry Christmas and a New Year filled with joy and fulfillment.  And less Covid too! 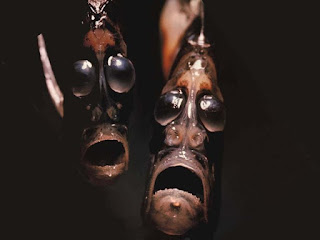 Hello ... it has been a long time!  Don't these Hatchetfish have exactly the right expression during this Covid pandemic!!?  Haha!  Hope you are keeping safe!

As you would expect, we have not taken any cruises in 2020! Seems like a safer option during these Covid times. I do have several upcoming cruises scheduled for 2021-22 - you can see them listed here.  My wife and I have been busy preparing articles for our new website biogeoplanet.com

You might be interested in some of these articles -- I've learned a lot in researching them, even after 13 years of providing science lectures to thousands of people.

OK - did you know that octopuses can get an erection?  In fact they are the only non-mammalian species able to do so (that we know about).  Pays to have erectile tissue in the hectocotylus!  The same article describes how the Argonaut octopus has a detachable penis!! 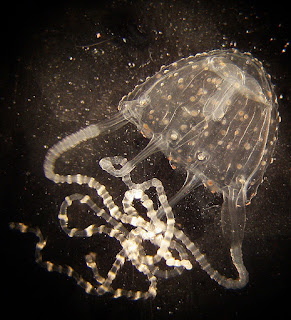 I believe you might find that my article on Irukandji jellyfish is one of the best sources of  up-to-date information available on this tiny yet life-threatening species.  I also delve into the fascinating subject of what it takes to succeed without a brain. 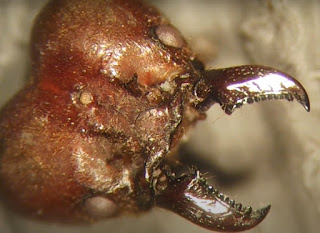 Read about Leaf-cutter ants, some of our favorite insects.  They are so cheery and colorful as they go about their work with their parasol leaves held up high.  I was fascinated to learn that their jaws can vibrate up 1,000 times a second as they cut through leaves.  It is not a fair society!  The workers that toil away in the dump are ostracized and attacked if they try to come too close to the nest.

Check out my 360 degree video on taking the cable car to the top of Table Mountain overlooking Cape Town, South Africa.  This is one of the most scenic spots we've ever explored in all our years of travelling the world.

I have tons more fascinating articles up on Biogeoplanet.com - please take a minute to check them out.

Wishing you all the best,

PS: My article on the most dangerous bird in the world is a hoot!!  Or squawk?

OK, I can't forget my encounter with a bullet ant - world's most painful stinging insect! 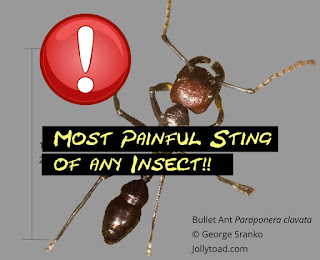 Excellent Snorkeling in the Andaman Sea

On our recent trip we flew from Singapore to Phuket, Thailand to go on an exciting 4d/3n snorkel cruise to the Similan and Surin islands in the Andaman Sea.  Here's a short 6 min video showing some of the highlights.

This was an amazing trip on a liveaboard boat with some of the best coral we've seen in the past 20 years of snorkeling throughout the world.  Owner/operator Ralf does a great job of finding hidden snorkel spots with plenty of colourful coral and fish but without masses of people.  Highly recommended - but definitely not for softies (the exercise mats on the bunk beds take a bit of getting used to).

The Similan and Surin islands are treasures that need to be protected for all time -- we were gratified to learn that Thailand has protected many of these islands and amazing reefs in National Parks - see Similan Islands and Surin Islands.  If you are using the Chrome browser, you can also check out this Google Earth link for a splendid 3D view of the Surin islands from above.

Unfortunately, the islands are suffering from too many tourists. At one point there were up to 7,000 visitors per day.  The problem of overuse has prompted park authorities to limit the number of tourists in the Similan Islands to 3,325 people a day.

The ideal time to visit these Islands is December to April when it is the dryer with clear waters making it best time for scuba diving and snorkeling.  You can even stay overnight in one of the campsites with tents and bungalows on Surin Nuea Island.

Thanks for visiting and happy travels!
Cheers, George
Posted by George Sranko