How to Pay for Your Next Cruise! 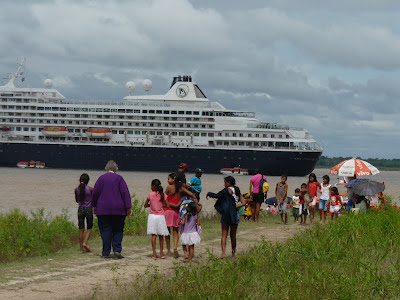 While cruising up the Amazon river on the Prinsendam, I lectured on some of the fascinating creatures that live in the river, rainforest, and associated ecosystems. Bullet Ants (named for the pain associated with their sting), Stink Birds, the real story about Piranhas (avoid swimming in small ponds during the dry season), Sloths, Howler Monkeys, Pink River Dolphins to name a few.  And then there's the Anaconda -- one of the largest snakes in the world.

What does this have to do with your next cruise??  Well, I told my audiences about the $50,000 Roosevelt Prize, on offer from the Wildlife Conservation Society of New York, for any snake caught alive more than 30ft long. It had remained unclaimed since 1912.


There is a bit of a catch (pun intended!)... the snake must be delivered alive and in good health, accompanied by all necessary permits and paperwork, to the Bronx Zoo in New York City. 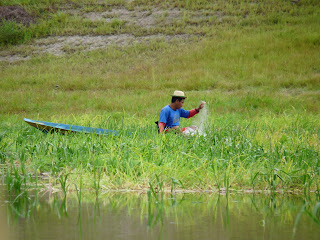 So, on your next cruise up the Amazon... be prepared! You too could collect $50,000 if you have the right gear.  I wish I had spent a bit more time wading through jungle swamps -- I might have stepped on a 31 ft Anaconda!!  Of course, that could end badly -- with the collector getting collected!

You can learn a bit more by following this link. 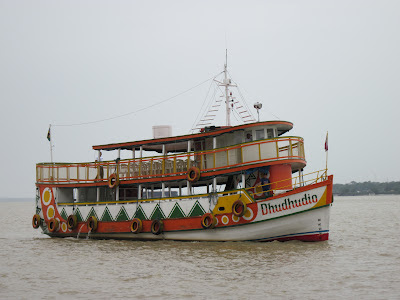 Linking Weird Weather to Rapid Warming of the Arctic

Scientists are discovering links between the loss of Arctic summer sea ice and changes in the polar jet stream over North America and Europe; with the likelihood of more persistent and extreme weather in years to come.

Weather patterns seem to be getting weirder during the past few years, with endless snow storms and deep freezes.  Then how about the winter of 2011/2012, with unusually warm and snowless conditions over much of North America?

Jennifer Francis writes, "In early February this year, the jet stream plunged unusually far southward over Europe, bringing frigid Arctic air and snow to some areas that hadn’t seen those conditions in over half a century. During summer, persistent weather patterns are responsible for droughts and heat. The record heat waves in Europe and Russia in the past several years have been linked to early snowmelt in Siberia, and a sluggish high-pressure area caused last summer’s sweltering conditions in the south-central U.S."

When I tell people about the 'Great Pacific Garbage Pile' they are often surprised to hear that the '8th continent' on our planet consists of nearly 4 million tons of plastics floating in the Pacific Ocean in an area double the size of Texas!

A 100-fold upsurge in human-produced plastic garbage in the ocean is altering habitats in the marine environment, according to a new study led by a graduate student researcher at Scripps Institution of Oceanography at UC San Diego.

The new study follows a report published last year by Scripps researchers in the journal Marine Ecology Progress Series showing that nine percent of the fish collected during SEAPLEX contained plastic waste in their stomachs. That study estimated that fish in the intermediate ocean depths of the North Pacific Ocean ingest plastic at a rate of roughly 12,000 to 24,000 tons per year. 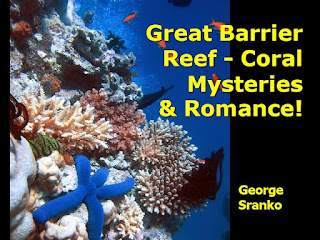 On a recent cruise on the ms Amsterdam through the Great Barrier Reef, I lectured about some of the amazing creatures of the coral reefs and coastal waters of Queensland Australia.  In Australia, swimmers in tropical waters are wearing "Stinger suits" to protect themselves from dangerous jellyfish stings. Some of the tiniest, but most dangerous, jellies are lethal -- including 10 species that can result in Irukandji syndrome. 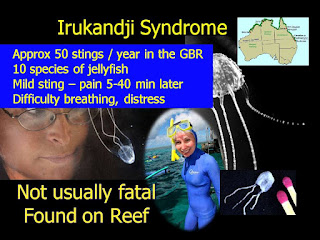 One of the deadliest creatures on the planet is the "Sea Wasp" Box Jelly (Chironex fleckeri) - a species that can kill a person in a few minutes.  These jellies are found along the shallow coastal waters of Australia. 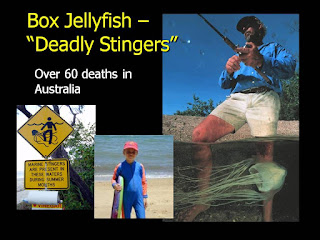 Box jellies are becoming more visible in Hawaii.  Fortunately they are not the same species as the deadly Chironex fleckeri.  Wakiki Aquarium has posted a very handy online calendar that provides the probability of box jellies on popular beaches based on the observation that they tend to appear between 8 to 10-days after a full moon.

Here's what the Waikïkï Aquarium and the University of Hawai‘i-Mänoa have to say about the species of box jellies found in Hawaii:

Box jellies (also known as jellyfish) belong to the invertebrate Phylum Cnidaria, a diverse group of stinging animals whose members all possess stinging cells for feeding and protection. Jelly/jellyfish relatives include the sea anemones, corals, and Portuguese man-of-war. The box jellies, or Cubomedusae, are named for the squarish shape of their bell-shaped body. Three species are now known in Hawaiian waters, Carybdea alata and a species Carybdea rastoni, and Carybdea Sivickisi. C. alata is the largest of the three, reaching sizes of one and a half to two inches and diameter and three inches in height. The smaller species is about a third the size. Each of these box jellies has four thin, pinkish tentacles that trail from the "corners" of the transparent body. Complex sensory structures are located between the tentacles, just above the bell margin; each contains a balance organ and a light detector that includes a lens. Box jellies are capable of directed swimming toward a light source, and are reported as the fastest swimmers among the jellies and their relatives. They are active predators, capturing small fishes and crustaceans with their potent sting.


As a group, box jellies are found in shallow tropical seas throughout the Pacific, Indian, and Atlantic Oceans. They generally occur in quiet, shallow waters of protected bays and estuaries, and over sandy-bottomed shorelines, though some species have been reported in the open ocean. Box jellies apparently descend to deeper water during daylight hours, but during summer months, adults are often reported at the surface. The tentacles, well-armed with potent stinging cells can inflict a painful sting on unwary beach goers. An Australian relative, the notorious "sea wasp" box jelly (Chironex fleckeri), is deadly. While the sting of Hawaii's box jellies is not usually lethal, it is reported to be more painful than that of the more common Portuguese man-of-war.

If you're planning a trip to Hawaii, the Hawaii Aquarium website is well-worth a visit!
Posted by George Sranko